So but the time we eventually left Nassau, all of us were practically chomping at the bit wanting to get off the rock and get our 5 day food fest underway.

We were delayed by about an hour so by the time we got to Marks flat it was pretty late, we pretty much dropped off our bags and headed straight out to a little pub down the road called Anchovies. Hayley and I were both not feeling the greatest so we weren’t origionally thrilled by this idea, however, once we were there and presented with a big basket of truffle parmesan fries and a plate of ‘italian’ nachos we felt considerably better. I’m not entirely sure why these are not more widely done, it’s basically nachos with bolognese, roasted cherry tomatoes and a good dollop of ricotta. Yum.

We woke up the next morning, bright eyed and eager to sample some of the sandwiches from the famous Parish Cafe on the corner of Mass Ave and Tremont St. It’s developed a serious cult following here and for good reason. Its also Mark’s local so it was a definite must do. The majority of the menu is made up of sandwiches, each one created by a prominent Boston chef and it quickly becomes apparent why everyone loves this place. Hayls and i couldn’t decide which one to have (surprise surprise) so we ended up splitting 2, the 1st one that jumped out at me was the mexican meatball sub, juicy coriander filled meatballs on a crusty baguette with red onions, tomatoes and pepper jack cheese, it also came with a delicious chilli dipping sauce. It was one of the most comforting sandwiches i’ve ever eaten, meaty and cheesy and carby, delicious. The second one we went for was a vietnamese chicken baguette with shredded carrots and courgettes and a coriander/mint mayo. I will be recreating these seriously soon, i think they might become a bit of a staple.

The evening held even more delights in store. Mark is working at Toro, pretty much regarded as Boston’s best restaurant so we decided to go there for dinner and indulge. Which we seriously did. I’m beginning to belive that having friends that are chefs is truly the way to go. Toro don’t take reservations and it’s not unknown to wait 2.5 hours for a table. The best thing is, not one person seems to care about this wait, everyone is more than happy to chat and chill at the bar and try some of the delicious cocktails.

The menu is tapas based but it’s not the standard tapas, there’s a lot of offal – something i’m usually pretty scared of and do my best to avoid but i was told by alex that i had to try it and i must say that it was good, and far exceeded my expectations. Jamie, the head chef is very clever in the way that the offal is presented, it looks pretty, no longer like an organ but a delicious tapa that you can’t wait to try.

The ambience is just what i wanted, dark and cosy with wood floors and tables and exposed brick walls. Most of the tables are communal which makes the feel even more intimate. We were lucky and didn’t really have to wait at all as Mark had put us on the list so we got there in time to be the next table to be seated.

We waited at what they call ‘the bread table’ where we ordered the 1st of many cocktails. Hayls and I got 2 and shared as we couldn’t decide (are you beginning to see a bit of a recurring theme here?) it’s great because we have incredibly similar tastes and are two of the most indecisive people you will ever meet. As a result, the majority of our meals will be shared, it’s so handy. Anyway, we got a Cold River Ricky- potato vodka, lime and raspberry and the Perro Picante- Hendricks gin, grapefruit and chilli. This was hands down the resounding favourite, I’m usually not the biggest fan of cocktails as they’re so sweet that i find that after one or two i need to switch to something else. That was not the case with these, they were perfectly balanced, a little tart and just a touch of chilli. My amazing boyfriend even managed to wrangle the recipe out of the barman so i think it might become my new go to drink. Having said that, i possibly didn’t need to have 10 of them which i’m pretty sure me and hayls had each had by the time we left.

The kitchen sent out some complimentary tapas (see what i mean about being friends with chefs) first came the razor clams with piquillo pepper sauce which were good but probably a little fennelly for my taste. 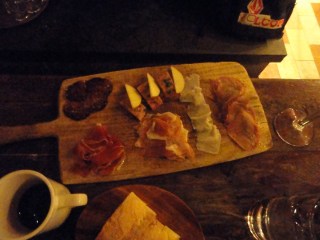 And the dish that, in an evening full of inventive, outstanding food, surprising took the crown. It is in fact the house specialty, something that i was surprised by until I tasted it. Grilled corn with lime, aioli, espelette pepper and aged cheese. Oh My God. Now i’m someone who loves corn anyway but this is unlike any corn i’ve ever tasted before, and seriously, i kind of want to eat it for every meal.

We sat down after this and then came the terrifying sight that was the Parrone. It’s kind of like a beer bong that you fill with wine and then pour in your mouth, trying to get your arm as far away as you can without pouring it all over your face. Now, being as uncoordinated as i am, this wasn’t so successful, by the time we left, i’d poured it everywhere and laughed so many times that i’m pretty sure hayley had a fine spray all over her. Nevertheless it was utterly hilarious. We felt 1 just wasn’t enough, 2 it is.

It was after this that we actually started the ordering, starting with a calamari bruschetta that was so good i couldn’t even get a photo before alex had tucked in

Next up was the beef short ribs, these were last meal good, rich and deep and on some of the best mash i’ve had in a while 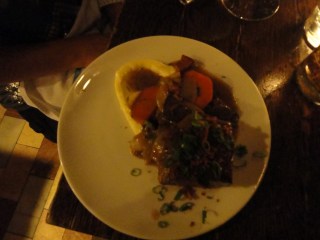 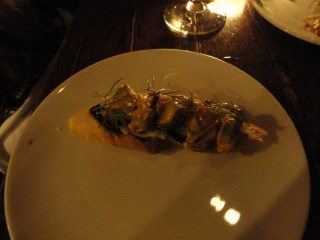 One of the surprise delights of the night, the beef heart bruschetta 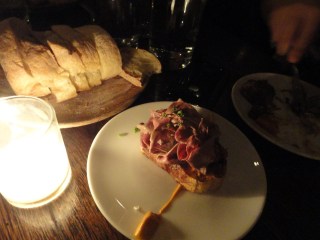 Another one i was surprised to enjoy, the veal sweetbreads 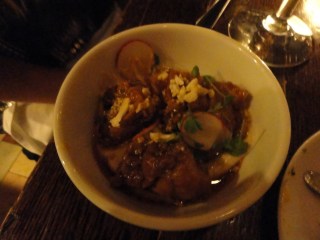 Pork belly with clams, smoked potatoes and celery gougeres. Utterly moorish, we were all wishing we’d order another one of these and it tied with the beef shortribs in 2nd place

We deliberated about whether or not this next one would be too filling but we went for it and we were all pretty glad we did. Rabbit and escargot paella.

We then had the one dish of the evening that we didn’t like. I did pretty well with my tackling of the offal, and with most of it i was very pleasantly surprised. I have my limits though. And my limit is tripe, it’s texture is something that i just cannot get on board with, i can only describe it as feeling like a mouthful of chewy fat.

Then we got another freebie, pork loin with broad beans and peas

Lastly we had grilled asparagus with jerusalem artichoke puree

We deliberated for a while about whether to have dessert or not but in the end, the temptation of churros overwhelmed any feelings of fullness we had. And i’m so glad we gave in. They were just what i want in a churro, super crispy on the outside whilst still being fluffy in the middle and then coated in an indulgent amount of cinammon sugar. The sauce was great too as it was nicely bittersweet. I hate getting churros that come with a sweeter chocolate sauce as you want something to cut through all the sugar on the churros themselves. In all, a really great way to end a fantastic meal. 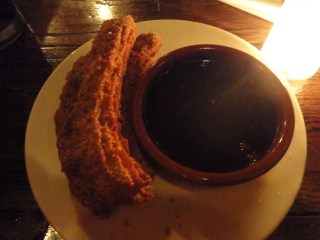 Once we’d finished, we decided to stay continue drinking our out of this world perro picantes at the bar until Mark finished work. It kind of has the feel of a speakeasy, it’s so candlelit and everyone is smiling and having fun that you just want to stay and carry on drinking- the kind of place where you feel like you can get away with anything. This was possibly an error as today was pretty shocking, we all barely moved today, venturing out only in search of food- shocking i know. I was also informed that i won ‘rack of the night’ as voted for by the chefs, many thanks boys, icing on the cake. All in all though it was honestly one of the most fun and most exciting culinary experiences i’ve had in a long time and can’t recommend it highly enough. If you ever find yourself in Boston go, i promise you won’t be sorry.