Well as you’ve probably noticed, the blog has been a wee bit neglected as of late so apologies for that. My love flew away to thailand and with him seemed to go my deisre to cook, but finally, i’ve stopped bumbling around and got back down to some cooking. Now, in all honesty, this is partly because i no longer have a resident Alex whipping up delicious Asian creations for me on a daily basis and the cravings are getting BAD! I needed a chilli fix, pronto. Also because the boredom of the countryside struck and i needed something to do. Since my return, mum has been asking for one thing and one thing only, cheesecake. It’s her big weakness so one of those was in the works today as well. Her favourite is the plain, new york style cheesecake so that’s what we went for. The good thing about this kind of cheesecake is you can basically please everyone. Make up one of these and then you can make up some different compotes or sauces and plonk them all down on the table and let everyone help themself, voila you have several differnet cheesecakes for the price of one. It’s also just a good base recipe to have as you can use it as a starting block and add a whole host of flavours and it’ll completely change it. For example, add some lemon juice and zest or some grated cinnamon, swap out the ginger biscuits for another flavour, anything you want really. I will admit, this isn’t the speediest thing to make, whilst the actual making of it is easy and has hardly any ingredients, you do have to fiddle with the oven temperatures a bit. You also have to show super-human self control not to eat it straight away as it needs to chill in the fridge over night, i know, i know, you really won’t want to but it’ll be worth it, i promise. This cheesecake serves 6-8

First things first, preheat the oven to 180C/160C if you have a fan oven 350F. Then melt the butter and crush up the biscuits, either in a food processor or in a bag with a rolling pin- this way is good for taking out some frustration. Combine the melted butter and the crushed biscuits and press into the bottom of a springform cake tin lined with parchment, bake the base for 10 minutes and then remove from the oven.

If you have a kitchenaid stand mixer then use that, if not then grab out an electric hand whisk and a bowl and get to work. Put the cream cheese in the bowl and beat on a low speed, gradually adding the sugar, mix until combined. Then add the the vanilla extract and eggs, one at a time, mixing slowly until combined and scrape down the sides. Lastly add the greek yoghurt and mix until everything is smooth and glossy, the mixture will be quite runny, don’t worry, it’s supposed to be.

Pour the mixture over the biscuit base and cook for 10 minutes before turning the oven down to 110C/230F. Leave the door over for 3 minutes to get the temperature down, and cook for 25 minutes.

Turn the oven off and leave the cheesecake in there for 2 hours, run the knife around the outside of the tin and then put back in the oven for an hour and a half.  It’ll be a bit jiggly in the centre but thats what you want, anymore and it’ll be overdone and just crack. 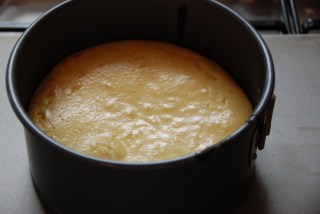 After that, get it nestled nicely in the fridge and tuck it in for the night. In the morning you can finally indulge, cut a much anticipated slice and enjoy. 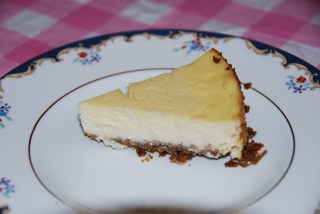 So, i don’t know if this is technically thai but it’s damn good, and honestly, when something is this yummy, i’m not sure you’ll really care how authentic it’s origins are. I was jonesing for something spicy and soupy and noodley and this just ticked all the boxes. I’m not entirely sure where the idea for this came from, i guess it had something to do with my brother not wanting shredded chicken – my go to meat for spicy noodle soups, in part because it’s something i usually have knocking around the fridge. It’s so easy to just roast or poach a chicken and have it in the fridge to chuck in salads, sandwiches, soups, pastas, anything that takes your fancy really. So, banned from chicken, i went to rummage in the fridge and found some minced beef i’d bought the day before to make chilli, spicy meatballs seemed like they might be the way forward, and after receiving the thumbs up from the frere, that’s just what i did. And it was good, by cooking the meatballs in the stock it took on a deep beefy savouriness that was just delicious and so satisfying. Combined with the heat of the chilli and the freshness of a bit of coriander and i had something i’ll be making again and again.

Fry the 1st four ingredients in a little oil until soft and then combine with the beef, chillis and spring onion. Smoosh everything up together so that you have a nice, even distribution of all the ingredients. Roll the mixture into balls about the size of large walnuts and fry on a high heat until they have a nice dark colour, you might need to do this in batches. Drain the meatballs on kitchen roll and set aside until you need them. 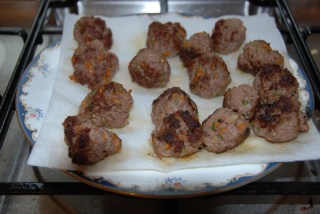 For the soup part: 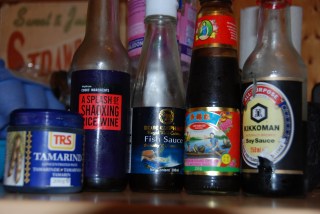 This is pretty easy i have to say, you pretty much just bung everything into a big pot and bring it to the boil, then simmer for about 20-30 minutes until you like what you’re tasting, removing the lime leaves about halfway through. Add the meatballs and simmer for 10 minutes until the meatballs are cooked through. Now, for some reason, my chillis were just not doing it for me heatwise (i think waitrose are having a couple of blah batches at the moment) so i added 10 dried red chillis to the mix after the soup had been on for 5-10 minutes. Obviously you don’t have to add this many chillis, it’s completely up to you, depending on how spicy you like things, but, as they say, some like it hot. 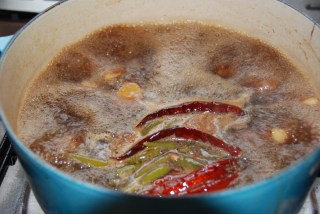 Whilst all this is blipping away, cook the bundles of ramen noodles in boiling water for 4 minutes, then drain and rinse under cold water.

Plating up is simple, put a nest of noodles in the bottom of a bowl, add some of the meatballs and ladle over some over the strained soup. Top with coriander leaves, sliced spring onions and some diced chilli (i fished out some of the dried red ones that had softened in the soup and chopped those up). All you need now is a spoon and a fork and to curl of somewhere and slurp greedily away, this is not a delicate little meal, it’s a great big bowl of comforting deliciousness, so just go for it.