Well we’re back from Nassau, back in my rather chilly homeland of England. When informed upon landing that the current temperature was 12 degrees, we both visibly winced. It was quickly decided that the only way to sustain ourselves was slight hibernation and some delicious food. Obviously this is all a tad over dramatic but when you get off the plane and it’s a good 40 degrees less than when you got on, it comes as a bit of a shock to the system.
After a measly little nap we motored up to london for the evening for dinner with alex’s sisters. We got off the train and jumped straight in a cab to Itsu sushi on Draycott Ave. Now originally i wasn’t thrilled about this choice as i was tired and grumpy and wanting something a little more comforting than raw fish, however, once we got inside and were seated next to the little conveyor belt, needless to say, i changed my tune. I love this kind of sushi place as i’m someone that gets pretty serious food envy, with this wondrous little system you can preview everything before making your decision (well decisions as obviously you get a few tasty little morsels). There were five of us, so we just got a big selection and everyone dove in, from tuna sashimi to gyoza, duck crystal rolls to yellowtail snapper sahimi, miso soup, squid, chicken and coconut soup, finishing everything off with a couple of big bowls of edamame. Now my love of edamame is verging on an addiction, they are, i do believe, the perfect pre-dinner pick/drinks party nibble. The healthy alternative to the crisp if you like. They’re also stupidly easy. Even if you can’t cook, you can do this. All you have to do is get some edamame beans in the pods, boil or steam for a few minutes until tender, toss with some good salt and you’re good to go. We had one bowl of the regular salted ones and one bowl tossed with chilli and soy and other yummy things ( i wasn’t paying that much attention, i was too busy eating). The duck crystal rolls would have been vastly improved by some decent hoi sin sauce, what we were presented with was thin and pretty insipid, not great. The miso soup however was awesome, i could easily have wolfed down several more bowls had i had room. We were all feeling a little virtuous at dinner so the wildly exciting drinks were endless rounds of green tea. This was definitely needed however as the combination of several weeks boozing in Nassau, combined with some rather mean jet lag meant that i was feeling lethargic, dehydrated and generally not too healthy.
After dinner i obviously scuppered this though when we were whisked off for drinks at the newly opened Playboy club. It’s still in it’s first week but so far so very good, the restaurant will definitely have to be sampled before too long but i would advise to steer clear if you’re on any kind of bikini diet. It’s not exactly what you’d call a healthy menu, good for the mouth, not so good for the waist. The real crowning glory however is Salvatorre’s, the ground floor bar. He’s a world-renowned barman and one taste of the cocktails and you can see why. I went for one of his signature cocktails, the Spicy Fifty, a perfectly balanced blend of vanilla vodka, elderflower, honey, lime and chilli. Definitely something i would recommend.
The next day it was off to Marylebone, our old stomping ground and location of Alex’s favourite pub. After running in, eager to see some familiar faces, only to be greeted by a girl we’d never seen before, i dragged a rather dejected Alex for brunch at Providores on Marylebone High St. It’s a great little fusion restaurant with a new zealand influence. A cosy, relaxed tapa room on the ground floor and a more formal restaurant on the 1st floor. I always head for the tapa room, especially at the weekend (we used to live 5 minutes round the corner) as their brunch menu is great. Having the usual brunch items as well as things for the more adventurous, those who are bored with the usual eggs benedict routine. If you do go for the standard – as i did because they use such high quality ingredients that it raises the bar, you won’t leave unsatisfied.
So, as i said, i went for the the Tapa room fry up, scrambly eggs, bacon, slow roast tomatoes and mushrooms, all on a nice bit of crunchy sourdough. This was all yum, if a little under seasoned. I’ll tell you what wasn’t though, the Boston baked beans. Dear lord, way too much smoky bacon and way too much molasses. The result was a bit of a sickening smoky mess. Not so successful. Nor was Alex’s i have to say. He went for the turkish style eggs, a delicious sounding combination of poached eggs, whipped yoghurt and a hot chilli butter. Sadly the end result was distinctly under-whelming, the yoghurt being so overpowering that in the end it was really the only thing you could taste. Our friend Mark come to join us just after we ordered and his banana and pecan french toast with bacon was a real hit though. A distinctly on and off meal, definitely not as good as the last meal i had there by a long way, i guess a lot can change in 5 months. I will say this though, whilst we stuck to tea this time, they do a Mango Bellini that is out of this world so if you find yourself there you should definitely try one (or two, or three)….

We headed back to the country for a couple of days to recouperate but sure enough, tuesday rolled around and we found ourselves back on the train and london bound once more. The evening passed in a haze of Mexican food, margaritas and champagne (along with a couple of others thrown in for good measure) and before we knew it, we were waking up, bleary eyed and in need of something to sustain and soothe and set our sights on The Breakfast Club in Soho. 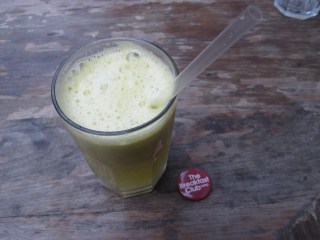 This was mainly because, whilst perusing the menu the week before, i espied a cheese and marmite toastie. Now, i definitely am a lover not a hater, firmly believing that many things can be improved by a loving lash of marmite so this was right up my street, especially when i’m not feeling my brightest.I also love that it does brunch every single day until 5pm. Excellent. Don’t worry, there’s also a regular menu from midday onwards if you’re not a brunch obsessive like us and in the evening you can bring along the booze of your choice and merrily consume to your hearts content.

Now that, a fruit smoothie with hangover boost (why don’t more places do that by the way?) and a shared plate of potato wedges with aioli (which was actually a bit weird, kind of sweet) and a was feeling like a new person.

Alex went for eggs benedict – no surprises there then and informed me that you could tell everything was super fresh which is always a good thing, especially as we ordered just before they stopped doing breakfast.

After all this we just relaxed for the evening, deciding that venturing out was simply not on the cards. Nothing like breakfast followed by an early night, totally the wrong way round and just what we needed that day.

The next day brought with it some delights of it’s own. Firstly, coffee and homemade alfajores with a friend followed by dinner at As Greek As It Gets, a restaurant in Earls Court that i’ve been meaning to try for over a year. Now, just in case you’re thinking “what the hell are alfajores?’ fear not, i’d never had one before either but my god are they something i’ll be having again. Made by my friend angelina, a fellow cordon bleurian, they’re 2 shortbread biscuits glued together with Dulce de Leche (surely the best kind of glue ever?) and then the outside rolled in coconut. Utter heaven, and something i’ll definitely be making before too long (or begging at her door for more).

After that, as i said, we headed off for greek food, something i never get enough as there seem to be so few good greek restaurants. I find this so strange as it’s something that almost everyone that tries it falls for but just never seems to be around. We decided to go for a selection of starters and skip the mains, mezze style, as there were too many tempting options to narrow it down any further.

First out there was Halloumi which was grilled to perfection and finished with just a squeeze of lemon juice, simple and moreishly good. Although, as you can see, the garnish left a lot to be desired.

Alex ordered an Avgolemno, a traditional chicken, egg, rice and lemon soup which i really wasn’t a big fan of. I usually like it but this one was just a bit insipid, some more lemon and some seasoning would have gone a long way. It kind of tasted like bland chicken rice pudding. Does that sound appealing? No, not so much.

There were also some very good garlic pitta breads with tzatziki and a dip of whipped feta and chilli which was so good we actually packed up what we couldn’t eat and took it with us! One of my favourite dishes to arrive was a spicy sausage cooked with onions and aubergine, soooo tasty, i actually didn’t share this very well.

Next up it was the turn of some broad bean fritters and squid stuffed with feta, peppers and onions. I liked the fritters, Alex didn’t. I don’t really like squid, he thought it was good. It’s all a matter of taste when it comes down to it but overall it was a pretty scrumptious little meal.

Last but not least were some courgette fritters topped with a little grated kefalotyri cheese. These were cooked so perfectly that the inside became perfectly creamy and fluffy whilst the outside was still crunchy. Finished with a squeeze of lemon and it all came together nicely, especially when i added a little salt.

Overall, although there were a couple of things we weren’t crazy about – me with the soup and alex with the croquettes – on the whole we had a pretty good meal. it’s somewhere i’d definitely check out again if i was in the area, i’d just maybe make a few menu substitutions. When it comes to the wine though, beware. Alex had a carafe of rose which was not good, i’d reccommend you go for a non-greek option if you want rose unless you like it cloyingly sweet as this one really was. It’s also pretty good value so it’s somewhere you can just pop into if you’re feeling lazy and not worry about breaking the bank.
I’ve finally got down to some cooking this week as well so keep your eyes peeled as there’ll be new recipes up soon.