I got a message the other week from a friend simply saying “I’m coming to London on Wednesday, cancel all your plans”. A dinner was promptly planned at a friends house and (shockingly) i was asked to bring along dessert. My original plan was to make a dark chocolate and salt caramel tart but then i remembered i had made the somewhat impulsive decision to give up chocolate for lent so that idea had to be scrapped. I’m quite glad of this actually as i decided to go for something altogether lighter, an apple tart. I’ve had this recipe knocking around for a couple of years now and it’s been ages since i last made it, although, having tasted it, i’m at a loss as to why, it’s really light and fresh tasting, whilst also feeling quite indulgent. There are still pretty cheap apples to be had everywhere as well which is always handy. It’s also very easy considering how impressive it looks and needs nothing more than a dollop of creme fraiche to go with it. You don’t have to use two different types of apples but it is nice to have to contrast, the bramley apples for the filling have a tartness and texture that you want for the cooked apple and the braeburn being much sweeter and prettier for the top decoration.

For the pastry, beat the butter, sugar, salt and lemon zest together until creamed together. 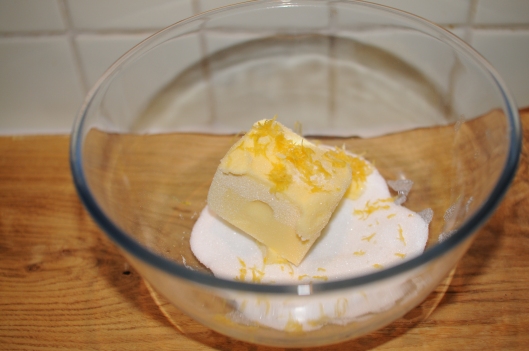 Then add in the egg and a splash of vanilla extract and combine.

Once everything is mixed, add the flour all in one go and bring together. You don’t want to overwork your pastry or it will go tough so as soon as it comes together in a ball, cling film it and put it in the fridge to rest for half an hour – an hour.

For the apple compote, melt the butter and add the caster sugar. When the sugar has dissolved, add the bramley apples, the lemon zest and the vanilla.

Make sure all the apples are coated in the butter and sugar and cook over a low heat until the apples have broken down, then allow to cool. This is what you want to end up with:

Preheat the oven to 190C. Take the pastry out of the fridge and smoosh together with your hand so that it’s pliable and all the same temperature (the outside gets colder than the middle so the smooshing together will even things out and make it easier to roll). Dust the surface and the pastry with flour and roll the pastry out to about 2-3mm thick and gently ease it into a loose bottomed tart tin, carefully pressing it in.

Stab the pastry base and sides all over with a fork, this will allow steam to escape during cooking, preventing the pastry from shrinking and puffing up on the base. Put back in the fridge for 15 minutes.

Next you need to blind bake the pastry, this involves covering the pastry with some parchment paper and weighting it down (this is also to prevent shrinkage, you won’t end up with a tart case if you skip this step, just a flat disc of tough pastry). You can buy ceramic baking beans for this but the best thing is to use rice/lentils/dried beans, anything you have knocking around your cupboard- these can be used over and over again.

Bake until the sides are turning golden, then remove the baking beans and put back in the oven until light golden all over. You don’t want it to get too much colour.

Once it’s cooked, fill with the cooled apple compote

and top with the sliced braeburn apples. Brush with the melted butter and sprinkle over the caster sugar. Turn the oven up to 230C and put the tart back in the oven until the top is lightly golden-keep an eye on it (do not wonder off to go and do your make up).

And that is why i’m saying keep an eye on it! If that happens, don’t freak out, it happens to the best of us, just scrape it off and carry on, no one even batted an eyelid and it was still yum.

Now all you have to do is serve up with a pot of creme fraiche and let everyone dig in.